A turn to sustainability 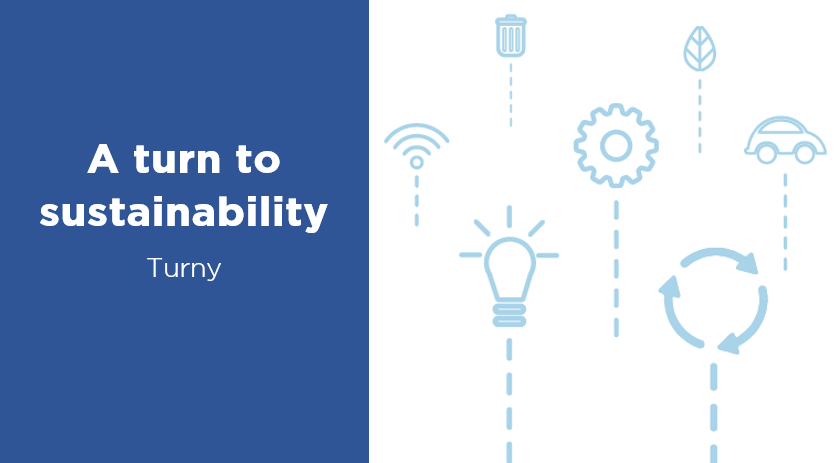 Long ago, Magdalena Trucco and Bruno Benetti had shared an interest in environmental issues and the concern to generate a business based on sustainability and the circular economy. So, when they learned of the contest organized by the Ellen MacArthur Foundation and OpenIDEO, in November 2017, they did not hesitate to present a project, since their skills made an excellent synergy to develop an innovative proposal. She is a clothes designer with a postgraduate degree in Environment and Sustainable Development and he is an industrial engineer. They decided to develop a proposal around a specific problem: how to bring products to people without generating plastic waste. This is how they got to delve into a topic they hadn’t think about before: the environmental impact of cleaning products. At that time the first seed was sown for what would later become Turny.

“Most of the cleaning products are sold diluted in large percentages of water, with a very low active solution,” explains Magdalena. “We noted that many large companies, especially in Europe, began to sell the most concentrated product in smaller bottles. But we thought: is it possible for this product to be solid instead of liquid? And, is it possible that instead of a small bottle, it is packaged in paper or cardboard? ». That’s Turny’s proposal: solid cleaning products, concentrated in effervescent tablets, that people can prepare at home by adding water and that are packaged in compostable sachets. This product not only avoids the generation of plastic waste, but also more efficient logistics than traditional ones, since, being lighter and more compact, they are easy to transport. Magdalena and Bruno also considered a formulation of the products based on green chemistry, which prioritizes the use of natural ingredients and eliminates substances harmful to health and the environment.

Magdalena and Bruno submitted their idea to the contest and won a prize that consisted of a seed fund that helped them to begin to bring the idea from ​​paper to reality. Then the challenges began. «The first challenge was technological. Most of the ingredients used in conventional cleaning products are liquid, so we had to find a solid replacement. By prioritizing natural substances and avoiding synthetic ones, the range of ingredient possibilities was reduced. Magdalena recalls that, in that first phase of development, they knocked many doors of private and public institutions to invite them to collaborate developing the first product. Their insistence led them to find two chemical engineers with whom they developed, in July 2018, the first Turny prototype: a multi-purpose cleaning tablet.

From that first pill to the current product, a lot happened. “We made hundreds of prototypes until we reached the right product for sale. We had to adjust many details, not only in the composition of the product, but with the scalable production processes. Sometimes you come up with a prototype that works very well at home, but then you don’t get the same results when industrializing it. ” The development phase was for both a dizzying stage of learning, both in chemistry and production methods. “We realized that we needed our own laboratory to be able to work every day and not depend on the time of third parties. That was one of the great learnings. This is how they rented a space in a laboratory and formed an interdisciplinary work team, also enhanced by external consultancies, including professionals from CONICET (National Council for Scientific and Technical Research of Argentina).

Along with technological development, Magdalena and Bruno also had to develop a business model that would allow them to introduce their products to the market. But not just introduce them; but turn them into a tool for social impact within the framework of a fair economy. This is how they identified a strategic sector for Turny’s expansion: domestic workers, who are mostly women.

In Argentina, one and a half million women work as domestic workers and half of them are heads of families. “Our idea was to build a network of Turny representatives, who can sell the products and also teach how to use them,” says Magdalena. The proposal is that these workers provide a comprehensive service, not only cleaning the spaces, but also the provision of products. “The idea was them to carry the products so that the person in the house or office does not have to take care of buying them,” explains Madgalena. “But also that they offer them in their surroundings, in their neighborhoods, to their neighbors, and that they can use them to increase their income and develop business skills in the process.”

The strategy with domestic workers has not been implemented yet, since cleaning work in houses and offices was suspended throughout 2020. However, the first Turny products were launched in September 2020: a window cleaner, a floor cleaner and a multipurpose cleaner, that were sold mainly in health food stores and organic stores. Madgalena says that, for that launch, they had planned several pilot tests in offices of large companies and public agencies. “But in March the total closure of the offices was announced, so that strategy could no longer be carried out. For this reason, we explored other alternatives and decided to sell in naturist stores, where many food and cosmetic products were sold, but there was a deficit of cleaning products. It worked very well for us.

Adapting to changing contexts is especially important for innovative initiatives, as they must face challenges for which there is no precedent. «There is no road traveled for what we are doing. For this reason, challenges constantly appear on formulations, packaging, biomaterials and also regulations ”. In this sense, the National Administration of Medicines, Food and Medical Technology (ANMAT) –the public body in charge of guaranteeing the safety, efficacy, and quality of health products– had to generate new guidelines that contemplate products such as Turny’s. “An innovation committee was formed to analyze the products in detail, as it was difficult to apply the existing regulations for traditional products. These are the things that happen when someone does something new”.

Turny also has great prospects for scale. “Although there are challenges to reach a mass audience, we trust that we will continue to follow the trend and the need of people to choose more environmentally friendly products,” says Magdalena. There is a growing desire in the world to incorporate zero-waste products, without plastics, made with safe ingredients and marketed in a fair economy circuit. For this reason, products like Turny have great potential for expansion. “They write to us from all over Latin America, and even from Europe, to place orders,” says Magdalena. “There are many opportunities and now we are working to meet the export requirements. We want to follow that way and make the first export of Turny’s products to Brazil, and then continue to other markets, as long as the investment accompanies us “.

In October 2019, Turny won the first prize of the Buenos Aires Resilient Challenge in the Circular Economy category. Thanks to this award, Magdalena and Bruno obtained the impulse and the necessary resources to set up their own production plant at an industrial level. Now, they have three products and plan to reach another three by 2021. Although it is not very busy, the path of innovation in the circular economy opens a universe of possibilities for research and development. Magdalena says that they are exploring the use of new ingredients, such as natural colorants used by indigenous communities in the Great American Chaco or substances developed from biotechnology. Innovation also has to do with the recovery of ancestral knowledge, and this is the thought behind Turny’s search: to be able to generate new technologies based on local knowledge that uses raw materials typical of the territory and that offers an economic development opportunity for communities. Thus, little by little, the circle is closing.

Although they had some doubts at the beginning, Magdalena and Bruno discovered that there were many people willing to change their traditional cleaning products for alternatives like Turny. And it is a niche that grows every day. “To change habits is a challenge, but right now we all have to change a lot of habits and we found that there were a lot of people willing to do it.” And change, precisely, is a core concept at Turny. The name comes from the nglish word “turn”. Turny seeks to be part of the turn that must operate in the production system to open the way to the circular economy. “That’s why we created Turny”, explains Magdalena, “because our desire is to change things towards a new reality based on sustainability.”