The raw material of utopia 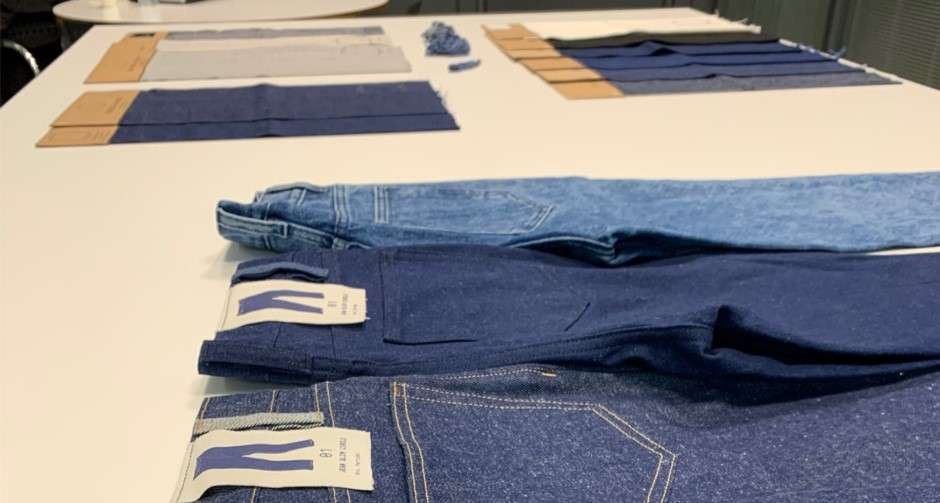 When Esteban Mantel began his master’s degree in Social Economy at the National University of General Sarmiento in 2017, he did not know that his way would lead him to rediscover the textile industry. Esteban is a graphic designer and has been working in apparel for thirty years. In 1991 he began working in various companies as a designer, product manager and manager, until 2011, when he created his own company, mainly dedicated to the design, development and production of jeans. But, over the years, Esteban was increasingly questioning the dynamics of the industry: the wear and tear of constantly generating new things, the incentive to excessive consumption and the social problems associated with the production of textiles, among many others. That internal voice, which he could no longer ignore, led him to initiate Shabu-Shabu, a brand that existed on paper, but which still had to acquire the social and ecological content that would make it a pioneer in the recovery of textile waste, in a context where the industry norm is discarding.

The textile industry is the second most polluting on the planet, after the fossil fuel industry. 62 million tons of clothing are produced annually, and six out of every ten manufactured garments are discarded before the first year of life. Just in Argentina, around 150 million garments are produced per year that, sooner or later, most of them end up in landfills or open dumps. In addition, the industry is related to major social problems, such as high levels of slave labor, a large number of clandestine workshops and precarious working conditions that textile workers are frequently subjected to. These problems were the ones that initially motivated Esteban to learn about social economy and the ways to apply it. And not only did he come across data that accounted for the massive socio-environmental impact of the industry, but also something that he already assumed: no efforts were being made to change it.

The recovery of textile materials in the world is in a very premature stage and in Argentina it is almost non-existent. There are two main sources of textile waste: textiles that are discarded after a certain use, ranging from pants, underwear and handkerchiefs to sheets, towels and covers for objects. And there is the industrial scrap, which are the small scraps that are left over after cutting the fabric to make a garment. In general, 5% of garment production is scrap. A small part of this scrap is recovered and used to make lower-quality textiles, such as floor rags. But the most optimistic estimates that less than 15% of all the scrap generated by the industry is recovered. Facing this scenario, Esteban began to investigate the recovery process for this material and to think about new industrial procedures aligned with a concept that little by little became his field of study: the circular economy.

“I started with technical development first,” says Esteban. “And as I progressed with my theoretical investigations, I began to see what could be done with all that material.” This is how he began a fieldwork that led him to meet with industrials, visit textile recovery plants, meet urban recyclers’ cooperatives and visit factories that produced rags from scrap. “Visiting one of these factories, I found that there they made a thread that they use to make things like shoelaces or hoodies, fashion accessories or even stockings.” In general, it is not said out loud that these products are made from reclaimed materials, as they would be perceived as lower quality. And, indeed, they are. It is a physical fact that any material loses quality after use and processing. But this thread was for Esteban the starting point to begin developing, not only the Shabu-Shabu product, but the design of the entire associated production and marketing process.

Before discovering this thread, Esteban had met with major clothing manufacturers to raise the idea of ​​generating a product made entirely from recovered materials. And while everyone had expressed interest in the idea, the responses were evasive: they did not have the time or the capacity to do it. So, when he found that thread, Esteban called them again: “I need time, machines and human hours to develop a material from this thread.” The thread was just the tip of the ball; he needed further development to generate the highest quality fabrics possible. And he managed to convince four companies to give him the resources he needed to develop this material. “Then began a year and a half period of experiments and tests that did not work,” Esteban recalls. Shabu-Shabu, which until then only existed on paper, as a project, was beginning to take material form.

After that year and a half in which Esteban dedicated a large part of his time to the development of Shabu-Shabu, he managed to reach the result he was looking for. Unlike what the cloth industry does – which processes materials to generate a low-quality product with a short useful life – Esteban managed to develop a high-quality product that is basically a mixture. A flat fabric is formed from a chain or warp, which is the group of longitudinal threads that are kept in tension, and a weft, which are the transverse threads that cross the chain. Esteban began to insert this thread into existing chains and managed to develop a fabric made 40% with recovered material and similar in resistance to a new one. Considering that in the international textile industry, the standard for this class of fabrics is between 10 and 15% of recovered material, and that in Argentina they did not even exist, that was quite an achievement. With this result, Esteban went to knock on the doors of the National Institute of Industrial Technology (INTI) and thus managed to develop a fabric made entirely with recovered material.

Shabu-Shabu has a whole catalog of textiles, from denims to sweaters and raincoats, all made with the same material. It also has a line of products, such as jeans, T-shirts, shirts and other garments. All this technical development was carried out within the framework of a great design, which goes far beyond of the design of a garment or a type of aesthetics. “There is no circular economy without design. Because not only the product is designed from that perspective, but the entire business model,” says Esteban. Shabu-Shabu not only uses industrial scrap, but also proposes to generate a post-consumer recovery circuit, in which used garments are recovered, processed, and reincorporated into the industry. In this way, besides to adding value to discarded materials, it also generates a cycle of continuous, circular use, based on the design of products manufactured for reuse.

Post-consume is the core of Shabu-Shabu and its circular pattern. Today, there are widely established industries of recovery of materials, such as cardboard and PET. But the same does not happen for textiles. Esteban knew that this industry had to be created and the first step was to investigate how the existing ones worked. “I started to study the incredible environmental impact of urban reclaim organizations. They are the major players in the circular economy, and they guarantee the necessary permeability for the recovery of materials. These organizations work as intermediaries between two main extremes of the production process: the waste generators and the buyers. The recyclers’ cooperatives recover the waste material, classify it, and process it to convert it into a raw material that can be reused by the industry. For this, they use their own, local technologies, developed by themselves, and adapted to the local needs and realities. And with this they meet another principle of the circular economy: the materials are recovered in the same territory where they originate. “Because, what circular economy exports and imports waste?”

Esteban spoke with cooperatives of urban recyclers who confirmed the reason why there is no textile recovery industry in Argentina: no one buys the material. The recyclers’ cooperatives have the willingness and the capacity to recover textiles, but they need buyers. And that is the great challenge, which far exceeds Shabu-Shabu, since it requires involving two other fundamental stakeholders: large companies and the State. Large companies, that generate the waste, are also who have the capacity to buy the recovered material from cooperatives and transform it into raw material to manufacture new products. And the State, to create and regulate the circular process through public policies. “The circular economy is a three-legged table,” says Esteban. “For there to be scale, environmental impact, market and quality work, recyclers’ organizations, private companies and the State have to be present.”

In February 2020, Shabu-Shabu won the second prize of the Buenos Aires Resilient Challenge and obtained seed capital to continue its development. But above all, it was recognized as a fundamental asset for the circular economy and urban resilience, since, in addition to being an innovative proposal, it focuses on an industry that has a huge negative environmental impact and that has not yet developed strategies to mitigate it.

Esteban is aware that the context is adverse. The big players are still reluctant to change. But when he started down this road, he also did not know that it was possible to recover all textile waste and, after two years of development, he proved that it is. Now, the immediate horizon is to position the material and ensure that it is recognized and taken up by large companies for the production of high-quality products.

Shabu-Shabu was born as a brand more than five years ago, but it made sense thanks to Esteban’s research in circular economy. “Shabu-Shabu is a cooking mode of Japanese origin, in which diners go to a restaurant and, instead of serving them cooked food, they are given fresh ingredients. So, people cook their own food, and while they eat, they also cook. It seemed like a nice metaphor to show that consumption is not separate from production. The consumers, while we consume, we are producing ». From this perspective, waste is a product. The concept of Shabu-Shabu synthesizes Esteban’s dream: a textile recovery industry, with separation at source, with awareness campaigns and large companies assuming responsibility for using recovered materials. «I believe that it is possible from the purest utopia. Because I also learned that utopias are what move us.