Biogas as fertilizer for urban farms 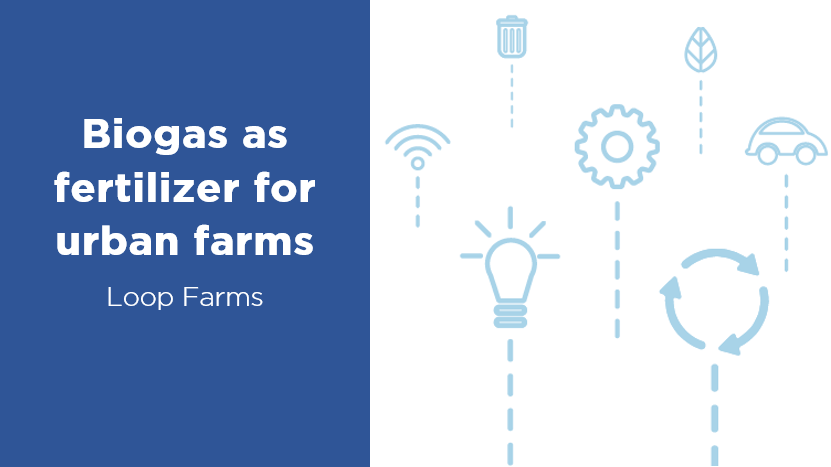 At first glance, there is no obvious relationship between biogas and hydroponics. But Mauro Barberis managed to unravel that relationship from a very specific search: how to use biogas waste. Mauro is a chemical engineer, and the concept of circularity is at the core of his training. For this reason, he needed to take another turn to complete the cycle of his own initiative, IFBIO, a company dedicated to the install plants and equipment for the manufacture of biogas, a gas generated from the decomposition of organic matter. So, when he received the call to participate in the Resilient Cordoba Challenge, he knew that this was the opportunity to take the turn he was looking for. That was the main idea that led his research and deepen him into the world of hydroponics, a method of growing plants in mineral solutions. And it also took him to meet Juan Pablo Las Heras, his partner at Loopfarms, an urban hydroponic farming entrepreneur that uses waste from biogas production.

Mauro had found in his research that it was possible to use biogas residues as inputs to growth vegetables in hydroponics. The production of biogas generates a substance that is generally used as biofertilizer and carbon dioxide. “Carbon dioxide, although not polluting, is vented into the atmosphere, and the biofertilizer is used for agriculture. But hydroponics allows adding much more value to this fertilizer, since the productivity of this technique is higher and more efficient water user”, says Mauro. Hydroponics is an added value that produces high quality food with the use of substances that would otherwise be discarded or underutilized. Mauro looked for similar projects in the world and only found a Swedish company that had developed a similar technology, but not entirely inclusive: «This company uses the nutrients from a nearby biogas plant, but it does not use the carbon dioxide, the electrical energy nor the thermal that are generated in the process. We use all the by-products and we have the biogas plant next to the hydroponic greenhouse ».

The meeting between Mauro and Juan Pablo was something meant to happen. Both, from very different roads and educations, shared the same concern: how to address a socio-environmental problem from the productive sector without generating waste and helping to strengthen the resilience of the city of Cordoba. Juan Pablo is a business administrator and had initiated in hydroponics in 2015, while living in Uruguay. But it was in 2017, back in Cordoba, when he launched Poniio, a business of supplies for hydroponics, installation and training in hydroponic gardens . After identifying the synergy potential between biogas production and hydroponic agriculture, Mauro began looking for partners to present a joint project to the Cordoba Resilient Challenge. That is how he met Juan Pablo. After some virtual meetings between June and July 2020, they both wrote the Loopfarms project and presented it in August. They won the first place in the Urban Circular Economy category.

The Loopfarms facilities have two areas:  a small biogas production plant and, and next to it, a hydroponics module. “We take organic waste from different places, such as restaurants or hotels, and we use it as inputs for the biogas plant. There, the waste is transformed and separated into nutrients, electrical and thermal energy, and carbon dioxide. And all those by-products go to the hydroponics module automatically. And there begins the production process by growing plants in water ”, explains Mauro. There the plants grow without soil, within a solution that provides them with all the needed nutrients for their development, in an environment that meets all their light, oxygen and temperature needs. “In the hydroponics module we recreate the optimal conditions for the crops development, with the environment and in the nutrient solution,” says Juan Pablo

Each 120-square-meter module produces 840 kilograms of vegetables, generates 6,000 kilowatts of renewable energy, and recycles 21,000 kilograms of organic waste each year.

Hydroponic farming has been implemented in many parts of the world that have a difficult time growing their own food. The pandemic stressed these difficulties and the logistical restrictions that were implemented globally highlighted the problem of food access. In countries such as Singapore, Japan and Israel, hydroponic agriculture has become a solution for growing your own vegetables. In 2018, Juan Pablo traveled to Israel and there he was able to witness the magnitude of hydroponic agriculture and the potential of scale this technique in that country. “Israel is a country where it is very difficult to produce, due to its hostile climate and arid soils. But with hydroponics they managed to produce all kinds of fruits and vegetables in greenhouses, with desalinated waters, nutrients, and fertilizers. They managed to recreate the conditions that crops need for their development and now, not only are they self-sufficient, but also export crops to Europe. Today they are an example of the development of food sovereignty. Everything has been achieved through hydroponics ».

But hydroponics is not only for countries with harsh climates, arid lands or very small territories. In 2020, the coronavirus crisis treated many cities worldwide with problems with the food supply. The food security has become a crucial issue for the different territories, especially for cities. The pandemic highlighted the fact that building food security is building resilience, and that one way to deal with this problem is to strengthen local food production. “Cordoba imports 80% of its food,” emphasizes Mauro. «To produce food in the cities is a change in the productive paradigm and it is a trend at a global level. It is increasingly difficult to supply food for the cities, every time they come from further and with less nutritional content. It is happening in Cordoba and in many cities around the world ».

The model proposed by Mauro and Juan Pablo not only contributes to resilience in terms of food security, but also reuses organic waste to make high-value products: energy, with the production of biogas, and food, with hydroponics. Loopfarms is in a development phase, in what Mauro and Juan Pablo call “Proof of concept”. They are in the process of installing a biogas plant and a hydroponic module in Ciudad Empresarial, a business area located in the city of Cordoba, with offices, companies, professionals, and government institutions. “When we presented the project to Ciudad Empresarial, they liked it a lot and they gave us an unused space that now has an added value,” explains Mauro. In this pilot test, the biogas plant will use the organic waste generated by the food business in the area, and the farms production will be used for sale.

But Mauro and Juan Pablo are expanding to other audiences. “We are targeting new urban farmers,” says Juan Pablo. “We also note that the majority of hydroponic farmers produce in small places, less than one hundred square meters, and that most of them prefer a niche market, closer, rather than a large production scale.” Smaller structures not only use less space, but they are also easier to handle. For this reason, the model that targets small-scale farmers makes it possible to diversify production nodes within cities. “Last year we noticed that urban farms are growing a lot and we believe that the Loopfarms model, of an urban farm integrating biogas and circular economy, can contribute to self-employment in cities and generating quality and local products.”

Traditional agriculture and the linear production model are both in crisis. That is also being reflected in people’s consumer choices. “We are seeing a great change in consumer habits and in the level of awareness of people regarding what they are consuming,” says Juan Pablo. “At the same time, the traditional farmer is producing less and less, while taking all the risks and paying very little for his crops. Then, when they make numbers, they notes that it is better for them to sell the infrastructure and put the money in an investment fund or do a real estate project ». For Juan Pablo, people have a great power to impact through their consumption decisions and this is being observed in the preference for products from family farming, organic or agroecological, free of agrochemicals and produced locally. “That is another important issue and that is a great innovation: we produce organic hydroponic crops, based on bio-inputs.”

The Loopfarms model has the potential to produce enough food to supply the city of Cordoba. The need to generate and strengthen a local production system grows every day, not only as an effect of the pandemic; climate change, land use change and environmental degradation require the world to transform its economic and productive model. But, for this transformation to be possible, it must come from the whole of society and be accompanied by public policies. “It is a political decision,” says Mauro. “There has to be a political accompaniment to move towards a circular economy, and there is a global trend for it.” Juan Pablo adds that consumer decisions also influence public policies and help to push changes. Facing the problems of linear production model and traditional agriculture, Juan Pablo and Mauro propose entering a loop, a circle, which is the form of sustainability.

Back to the Initiative’s site
Back to Cordoba’s site