The paths of glass 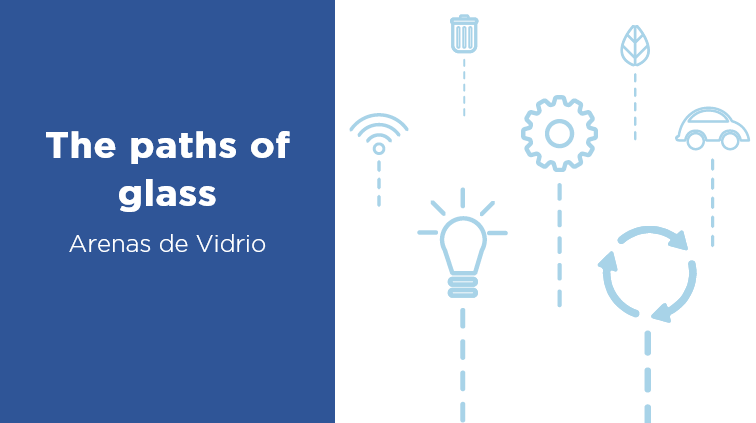 After fifteen years of dedicating to collection management and logistics in Montevideo, Ana Paula Demaría found herself in need of reinventing herself. It was 2018 and, for reasons beyond her control, she had lost her two main clients, which led her to face a scenario in where her future suddenly became uncertain. For some time, Ana Paula had great interest in issues related to access to safe water and the inequities that exist in many regions worldwide. The path of investigating this and other environmental issues led her to learn about the problems behind the glass. That was the first seed that would later be transformed into Arenas de Vidrio, an initiative to generate a glass recovery circuit to transform it into a valuable product that can be used as a raw material in the construction industry and as a water filter. And although Ana Paula was not an expert on the subject, she had other qualities that would be decisive to make her way into an almost unknown world: awareness on environmental issues, creativity for solutions and the audacity to implement them.

“Life sometimes takes you down ways that you did not imagine.” Ana Paula did not imagine that, after studying Psychology, she would end up working in the collection and logistics sector. But neither she imagined what came after 2018, the year she lost his management job. “While looking for a place to go, I became interested in recycling, the circular economy and, in particular, the life cycle of glass.” Ana Paula began to investigate the recovery of glass in Uruguay and found that it was practically non-existent. Around 22,000 tons of glass are discarded each year – mainly from the food industry – ending up in landfills. Glass is an inert material, which means that it is chemically stable and does not break down into harmful substances. And, on the other hand, Uruguay does not produce glass, but imports it. Thus, the country is in a cycle of importing this material, that does not degrade and retains its properties over time, to use it only once and, finally, discard it. Ana Paula noted that the problem about glass was serious, but she identified a great opportunity for a project.

“At first, I thought on the project as a marketing campaign to recover the packaging in a sustainable way, but then I realized that there was no glass industry to take over the material.” There was an unfulfilled and many companies, especially those that she knew from her work in collections, were interested in a solution. “I started thinking about a service not only to recover the material, but also to use it for something.” This was a great challenge, since despite its benefits, the recovery of glass presents great challenges: its weight and volume make handling logistics difficult and expensive, and it is risky to handle. In her research, Ana Paula found a possibility to use crushed glass for water filtration systems. That led her to research more about the glass crushing process and its possibilities of use.

It turned out that crushed glass could be used for a lot more things than she thought. For example, in the construction industry, as a substitute for sand. Ana Paula further expanded her studies. From the possibilities of using glass, she began to learn about construction materials, their requirements, and possibilities. And she encountered another major environmental problem related with huge volumes of sand consumed by the construction industry. Although sand is naturally abundant in Uruguay, it is a finite resource. There is not only an availability problem, but also of the environmental impact caused by its extraction, transport, and distribution. It is estimated that construction in Uruguay consumes more than two million tons of sand per year, which is extracted mainly from rivers and streams. For this reason, Ana Paula began to think about the possibility of using crushed glass in this industry as a replacement for sand. And that was her first project.

«I applied in 2019 to a call at the National Development Agency of Uruguay, that finances or supports productive circular economy projects. There I presented the project, but it was not selected ». Although the project was innovative, the justification for the rejection was that technical studies were deficient to confirm that crushed glass could be used in Uruguay for asphalt-cement mixtures. “It was demonstrated in other parts of the world, but not in Uruguay.” Therefore, this apparently negative result led her to seek the validation to implement the initiative. In 2020, she presented another research project to the National Research and Innovation Agency (ANII), very different from the previous one, and sponsored by the Chamber of Industries of Uruguay. The experiment, which is still progressing, aims to evaluate the efficiency of glass sand as a substitute for natural sand in filters for different types of water. It had the support of Latitud-Foundation of the Technological Laboratory of Uruguay and was declared “Of Ministerial Interest” by the Ministry of the Environment.

For each of the steps of the project to become a reality, Ana Paula knocked on the doors of the beverage companies in which she had worked as manager, of academic institutions and of state entities. She connected with Grupo Bitafal, a business consortium for research and formulation of asphalt mixtures. It provided its technical knowledge and facilitated its research laboratory to test different mixtures for products applicable in roads. Ana Paula also managed to sign an agreement with the University of the Republic and National Beer Factories for a research project on ground glass and its use in various cement mixtures. Thus, little by little, she built a network that Arenas de Vidrio needed to begin to turn its ideas into reality.

During the two years of the technical tests, Ana Paula had to learn about engineering, construction and materials, but also about economics, logistics and equipment. “As a psychologist, entering that world was a head-wrenching. Now I am convinced that I can do it, but sometimes I find it difficult to speak as equals with people who know about these topics and studied things that I do not. Deep down, what motivated me to keep going was the conviction that this could be done and the illusion of being able to materialize it in my country ».

Arenas de Vidrio was conducting more tests in alliance with Urugestión, a waste management company, until, after many mistakes and some successes, they achieved a texture of the crushed glass similar to sand. And then they ran tests on material mixtures to find the best way for it to be used by the industry. In this process, Ana Paula received the news of the Resilient Montevideo Challenge and she did not hesitate, it was the third opportunity to present her project, this time, much more robust than before.

In December 2020, Ana Paula won the Challenge. «The project that I presented includes this entire recovery circuit, with an innovative addition: to put a shredder inside the collection truck. This will let us crush the material as we collect it and reduce its volume to fill the capacity of the truck bought thanks to the Challenge ». The goal of Arenas de Vidrio is to create a selective glass collection circuit, that does not exist in Montevideo today, and connect it to the existing circuits for the recovery of cardboard and PET. However, Ana Paula is aware that the construction industry requires huge volumes of glass sand, so this collection and crushing circuit must be large and constant enough to supply a highly demanding industry. To achieve this, Arenas de Vidrio is also coordinating with local businesses, especially food ones, as permanent sources of glass supply.

«Currently, the world of glass is practically unknown in Uruguay. We still do not have a baseline that allows us to estimate how much material we can recover. And we do not know what the response of the people will be to a glass collection campaign. Ana Paula mentions the cultural issue because glass, to be recovered, requires certain hygiene and cleanliness conditions that many times people are unaware of. It happens because there is no glass recovery culture, as there is for materials such as PET and cardboard. For this reason, the first pilot of Arenas de Vidrio consists of organizing a small recovery circuit, with some business and buildings, for them to begin to understand the dynamics would work on the ground. «The idea is to know how many times we have to go through the premises to collect, the returned material’s conditions, the kind of training and communication that users need to separate the material so that it can be used and how much glass a person consumes average per year. We have an estimate, but we want to verify if it is real. “

Arenas de Vidrio is taking the first steps in an industry with enormous potential. And there is already a real project for the use of this the material.

At the end of May 2021, the first experimental section of asphalt with the glass sands paved a hundred meters of a street in the city of Trinidad, capital of Las Flores Department. There are also other projects in development to build of bike lines in that same department.

Little by little, Arenas de Vidrio is making progress in the implementation of projects and in recognitions. In the run-up to the celebration of World Environment Day, Arenas de Vidrio received a mention in the “Uruguay Natural” National Environment Award, an award that seeks to recognize sustainability actions and promote good practices of environment care.

For Ana Paula, the possibilities are endless: «Today we are focusing on post-consumer glass, but there is a universe of waste from other kinds of glass that could also be used to make sand, such as the windows of houses or vehicles. Thus, eventually, the same industry could reuse its own waste.»  Ana Paula says that her main role is as an articulator and that, in an unexpected way, Arenas de Vidrio allowed her to reconnect with the career she studied years ago. «I always say that I am a great weaver. The important thing for me is to keep connecting the dots, and psychology has a lot to do with that, connecting the dots, connecting people, assembling common goals, projects, and dreams. From the beginning I wondered if it was possible to unite one thing with another and I said to myself: “Why not? It could work””. And Arenas de Vidrio is a proof that it worked.

Back to the Initiative’s site
Back to Montevideo Resilient Challenge