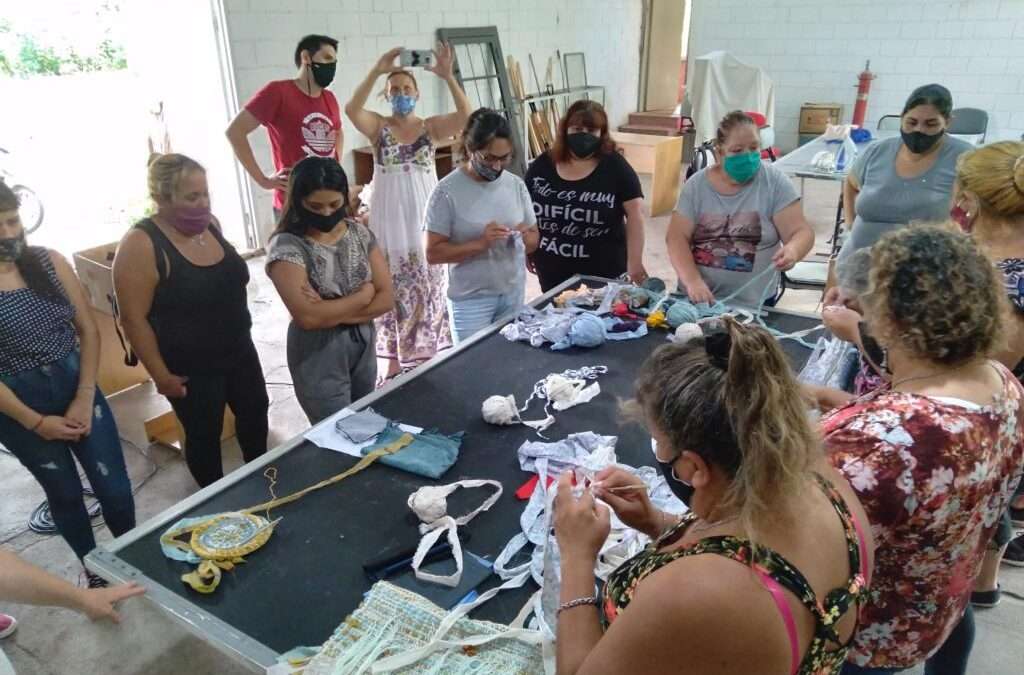 Like every year, Veronica Ravarotto and Fernando Lobo had started 2020 working hard. While people enjoyed the school break between January and February, they spend every summer making uniforms to start the cycle in March. But that year the classes didn’t start. In February the coronavirus arrived in the country and on March 16 all presential activities were canceled, including school. From one day to other, the sale and production of uniforms was paralyzed. The company that they had since 2003, TP Uniformes, for the first time had been paralyzed. But, within the crisis and uncertainty of that moment, both embarked together with their team, in a task that, finally, would extend throughout that year: the recovery of textile waste and its transformation into something of value. This is how Hilanda emerged, a project that seeks to generate new products from the recovery of scraps from the textile industry. And that weaves new relations and learnings along the way.

Hilanda was born as a family tradition. «Within my family, my mother and my grandmother were always seamstresses, weavers and I also have an aunt who is a dressmaker. And every little piece and every old garment that was in the house was kept and used to make something: a kitchen apron, a rug, a padding, a dog bed”, recalls Verónica. Later, when she and Fernando began to produce school uniforms, that tradition continued, but on a larger scale, and that gave them a dimension of the environmental impact of the textile industry. From the 53 million tons of textile fibers generated annually to produce clothing, more than three-quarters end up in an incinerator or landfill after the period of use, which is getting shorter and shorter. It is also estimated that, half a million tons ends up in the ocean in the form of plastic microfibers. Only 12% of the fibers are recycled to generate, mainly, lower quality products.

In Argentina there are no statistics that account for the impact of the textile industry, but Verónica and Fernando know that it is great and that little is done to mitigate it. “We see that the industry is not aware of the damage it causes. When you say that the textile industry is the second most polluting in the world, in general colleagues stare at you, incredulous, “says Fernando. «I always make the analogy between fabrics and pizzas. It is like if you want to make a pizza and you made a square dough, you cut the round shape and the rest of the dough was thrown away. That happens constantly in the textile industry. Fernando talks about industrial scraps: small pieces of new fabric that are discarded after cutting the molds and that go directly to the garbage dumps.

The environmental concern is also a heritage, although it is shared by both, and is influenced by the Sierras de Cordoba, their place of residence. “Here in the Sierras the impact of garbage is very visible. We see it every time the tourist comes. For this reason, we have been concerned with the environment since we were children, from our families. Circularity is in our DNA ”, says Fernando. And Verónica adds «Los Cocos, the town where we live, remains divine. You go to the street and you see plants, sidewalks, and that is what we want to see, not garbage. For us, that is a value, it is something that must be taken care of. We have clean rivers, with crystalline watershed waters and that is invaluable. You have to take care of nature as it is ». That desire to take care of their environment and nature led them to think of ways to avoid damaging it, but also in alternatives to contribute to the social development of their city. In that regard, the textile industry also has a lot to change.

Hilanda’s first steps were experimental. Veronica had long wondered about how to recover industrial scraps and add value in the process. And for the first time she had free time to brainstorm ideas and experiment with new methods. “We had a clear premise: we wanted to recover our discards and those of our colleagues in the simplest way possible,” explains Veronica. And she began to experiment at home. She sat down at the machine and began to sew patches in various ways. But they all took a lot of work and produced few results. She needed to develop a simple technique, which did not require complex machinery and could be done with the tools that any textile workshop has. And so, after a long process of prove, she developed the material that is the foundation of Hilanda’s products: textile chipboard, a seamless, heat-bonded patchwork material that is insulating and can be used as padding in many types of garments and objects.

“The textile agglomerate fulfills the function of a wadding, the material used to fill coats or quilts”, explains Verónica. “This material keeps heat, so we use it for many other things. For example, to make slow cooker thermal bags that are used to finish cooking food. And the most important thing about textile agglomerate is that it is manufactured using a simple technique and can be made in an industrial or in an artisanal way. “That fulfilled our idea of ​​doing something very low tech (low technology),” says Fernando. “It can be done with things that are available anywhere and that any workshop has, no matter how basic. We gather things of the industry and that are used all the time, but that we have never collected that way. Textile agglomerate is a very basic technique, but we have never seen it before ».

One of the first things they noticed when they finally managed to develop the agglomerate was that they needed to start a new company and a new circuit, involving the organizations they already knew and with which they had been working. Fernando, who manages sales and relations with suppliers, began share the idea with some well-known non-governmental organizations and cooperatives with the idea of ​​generating new alliances to help them produce the textile agglomerate on an industrial scale. “We wanted to work with non-governmental organizations or with workers’ cooperatives and associations,” says Fernando, “but it also sometimes happens that these NGOs and cooperatives fail to professionalize their work.” For this reason, for Veronica and Fernando it was necessary to work together with workers’ organizations to help them become professional, standardize their processes and give continuity to production. And thus, generate trust in customers.

All these conversations were already underway when the news of the Resilient Cordoba Challenge reached Fernando. “We are very curious people, and we like to learn and do new things,” says Veronica. «And we share life with many restless people who are always looking for ways to improve the quality of life, the environment and the care of the environment and people. And Fernando came across this contest in one of his work’s travels. They all told me to participate, and I did it stone-faced. As I had a lot of time, I was able to develop the proposal and make the project description, which took a lot of work. But I was not expecting the honor of winning the award. It was a huge and wonderful surprise. And then I realized that I was the only woman among the finalists. Considering that the Hilanda workers are mostly women, I think that we should occupy more these spaces ».

This is how, in December 2020, Hilanda won the second prize of the Cordoba Resilient Challenge in the category of Urban Social Economy. The award gave them an unexpected nudge to foster the implementation of the project. “We were going to do the project anyway,” says Fernando, “but it was going to cost us a lot more work and we were going to have to invest a lot of money. But, in addition, from the Challenge we started with the formal constitution of the project, which until that moment we did not have it. The idea was in our heads, we met friends who are part of the project, we did the tests and rehearsals, but we didn’t have it in writing. In that text, there were the description of the textile agglomerate, the technique to manufacture it and the potential it has for the recovery of textile materials. It was also the social impact of a project that generates decent, quality work was reflected within the framework of a fair trade route that not only adds value to products, but also to workers’ organizations.

2021 began with a new challenge: to ease and expand the commercialization circuit of Hilanda’s products. «Since we won the Cordoba Resilient Challenge, we began to make contacts to work in a network with many organizations and with stakeholders. We spent a lot of time making calls, contacts, sending emails, and we met a lot of interested people, with open arms, willing to collaborate ». Veronica continues surprised by the predisposition that they have found among the organizations they have contacted to join the Hilanda project. «Recently we went to talk with a workers’ cooperative in Villa Libertador and they told us that they were in a downturn, both in terms of productivity and mood, but that they raised their spirits to join the project and learn how to do new things using what they already have.

Verónica says that in Hilanda they were always circular, only in 2020 they started using that word. “Circularity is not only in taking charge of textile discards, but also in becoming aware of the social issue. People increasingly demand to know where what they buy comes from, who made the garment and under what conditions. And after wearing the clothes, what happens to them? For Fernando, in the textile industry you must give the discussion that is taking place in many other industries, which has to do with the disposal of materials. “Our enterprise has a lot of potential, but to reach a circular system, we have to rethink the production system as a society.”

Meanwhile, Hilanda begins to weave a thread that, based on the recovery of textile waste, unites people and organizations that are articulated around collaborative work and that generates new relations between human beings and nature. Hilanda is a thread that is alive and that is always enlarging its fabric.