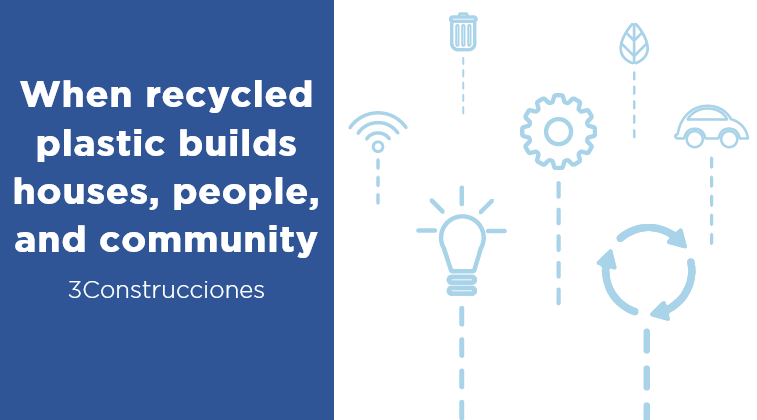 The concern about the issue of work in the vulnerable sectors of society was something that had been on Lucas Recalde’s mind for a long time. That concern led him to promote initiatives to create jobs in his native Cordoba, especially in the rural areas of his town, Agua de Oro, located in Sierras, Argentina. This is how, together with his two partners, Victoria Paez Molina and Federico Brunas, they began to work on the elaboration of construction materials, made with clay by young people from vulnerable communities.

One day in 2014, Lucas found a bundle of plastic bottles in a garbage dump. That was the beginning of 3Construcciones, a company of a high-quality construction system from blocks made with plastic waste with a triple impact –economic, social and environmental–. These blocks are produced at very low cost, with minimal energy use and, most importantly, by the hands of people living in poverty, who are the first beneficiaries and who, in the process, build relations that give meaning and purpose to their community.

“From the beginning, our objective was to create works in vulnerable communities,” says Lucas. “We sought to meet this objective from different occupations, until we went to the construction industry, because we saw that it was in high demand.” That bundle of PET plastic bottles was the beginning of a long road of trial and error to find the final product. Lucas knew that behind that mountain of what for many people was garbage, was the raw material that opened up endless possibilities to transform it into something of value. “We were looking at high-quality materials. Because, although they had lost their original function, they still preserved all their properties. Those properties are ideal for construction: plastic is a light, resistant and insulating material. And in the process, it was removing tons of waste from the landfill.

Lucas and his partners began to do the tests to analyze the how to transform those discarded plastics into construction materials. This led them to investigate the technologies they needed to achieve this double objective: to create a material of the highest quality suitable for constructing buildings and to create jobs in vulnerable communities in the Sierras de Cordoba. This is how they discovered the appropriate technologies, based on the knowledge and conditions that their future users already have and that focus on promoting the development of communities.

This implied not only incorporating local knowledge and skills, but also designing based on the possibilities of the communities. «With these criteria, Federico designed some manual machines to wrap plastics, that can be installed at a very low cost and consume a minimum of energy and no water at all. Thus, we were able to introduce an innovative product into an existing socio-productive system”.

The initial tests of the material were handcrafted. “The first thing we did was to test whether the material served as a hard backing and as a thermal insulator. We use the wood frame system, which is traditional in construction. We verify its fire resistance when it is revoked with a fire retardant material and we exposed it directly to a blowtorch for an hour. After these tests, they reached the first prototype, and took it to the National Institute of Industrial Technology to carry out the highest-level tests. Thus, they developed a low-cost material with a simple production that response to diverse and complex socio-environmental problems and with a very competitive market price. “From the inside, the technology is simple and appropriate, but to the outside, it is a solution that addresses several problems at the same time: post-consumer plastics, vulnerable work and habitat.”

When Lucas talks about technology, he refers to something much broader than the development of a material. He talks about a whole productive system that establishes alliances between communities, between organizations, and that changes the vision of people, both of their communities and of themselves, reinforces community ties and creates individuals who recognize their own value and the contributions they can make, and indeed they do, to society. Scale is necessary to consolidate such a system. Once the first house prototype was built, 3Construcciones had to take the next technological step, which was to introduce the product to the market.

It was then that Lucas looked for Juan Pablo Cmet, a lawyer graduated in Philosophy and a development entrepreneur with years of experience in the construction industry. Juan Pablo had the knowledge required to introduce 3Construcciones to the make and he also shared the same vision on the technological innovation and its role in society.

“Many times, we think that when we talk about technology or innovation, we are talking about ethically and politically neutral issues,” says Juan Pablo. “But technologies manifest and highlight certain situations, and innovation often speeds up processes. For this kind of innovation, we first questioned what for and why innovate. ‘ Both Juan Pablo and Lucas were clear about the purpose of the innovation. But innovation is not in a material either, the material is the consequence of a deeper innovation, in principle, in the individual and in his own gaze. «I can see a bunch of objects as garbage. But I can also see them as an input. Those objects did not change; what changed was my conceptualization of those things, “explains Juan Pablo. And the same conceptualization change can happen on a community: “I can see a fragmented and divided community, or I can see stakeholders with potential for synergies.” These conceptual innovations are those that give rise to new technologies, oriented towards other purposes and based on new premises.

Appropriate technologies developed with a clear purpose must also have the potential to be scalable. Lucas and Juan Pablo share the same vision on scalability: the innovations with the greatest potential for scale are those that best interact with things that already exist and work within a community. «Our base product, which are the 3C blocks, are made with the knowledge that waste collectors already have about pressing materials. And a minimal knowledge of carpentry is added to the process: knowing how to cut, paint and nail” says Juan Pablo. The knowledge growths as the productive system enhances. The workers acquire knowledge about construction, foundations, frameworks and finishes, knowledge that many people already have because it is part of their traditional methods. In this way, the plastic block is included in a production system with consolidated methodologies resulting in a first-class home, designed with care for aesthetics and high quality standards.

All these innovations foster new dynamics that lead to unexpected results. Neither Lucas nor Juan Pablo imagined that many clients would begin to ask them to make the inside of the wall visible so that people could see that it was made of plastic. The power of the 3Construcciones method lies in the fact that, once the resistances that any innovation can generate have been overcome, when seeing that the material works and that excellent results can be achieved, the purpose begins to take on an important dimension: «Once they overcome fears, people want to show the added value. The added value that Juan Pablo talks about has to do with the social and environmental results. Not only the houses are beautiful and quality, they are also made with tons of plastic that will no longer go to landfills or the oceans, made by the hands of people, that used to be in vulnerable conditions, and become part of a productive system that generates solutions to major socio-environmental problems.

In October 2020, 3Construcciones obtained first place in the Cordoba Resilient Innovation Challenge in the Urban Social Economy category. It fosters a larger scale in their production.

Throughout 2021, they project the activation of six micro-plants in the city of Cordoba that will generate 120 quality jobs and that will be capable of building 8,000 square meters from the reuse of 6,700 cubic meters of post-consumer plastics.

Furthermore, the carbon footprint of these plants, which is a measure of the amount of greenhouse gases they release into the atmosphere, is negligible compared to that of other building materials industries. Currently, the company is developing its strategies for scale, but it has already surpassed the province of Cordoba: it has clients in other Argentine provinces and has even reached Cameroon. But the most important thing is that it is growing a network with organizations of urban recyclers, private actors, universities, and the State. The model is flexible, and it can be implemented by communities worldwide and adapted to their realities.

The plastic block is the third of the constructions. It is the materialization of the other two constructions that are the basis of the model: the building of the individual and the of the community. The person builds himself as he comes out of the exclusion and, through work, comes out of poverty, acquires a purpose, interacts, and creates ties with other members of his community. In turn, the community is built on those interactions that, as they grow, expand, and enrich with diversity, the construction is strengthened. The last part in this process is the material construction, the block made from plastics, which is the raw material of a building. And the foundations that support those houses and those buildings are not material, they are the social relations that unite people and organizations that are building much more than a house: they are building their present and their future.